One of the first new pieces of furniture Brian and I bought for our new house was a 9ft (expandable to 12 ft) solid walnut dining table from one of my favorite stores, Madison McCord.
And thus began the search for a rug. I had originally intended to decorate our living and dining room in a monochromatic color scheme -- ranging from creamy whites, to dark grays and taupes, to shiny metallics -- but eventually grew a little bored with the idea. So, I decided royal blue would be a great (and much needed) pop of color.
I scoured the Internet and stores for months, but could not find anything I loved at the right price. I finally did something I don't recommend: I settled. I bought this muted navy flat weave jute rug from Overstock.com. It was a 9' by 12' rug for just over $100, so the price couldn't be beat. And truth be told, it's not awful. I just don't love it. 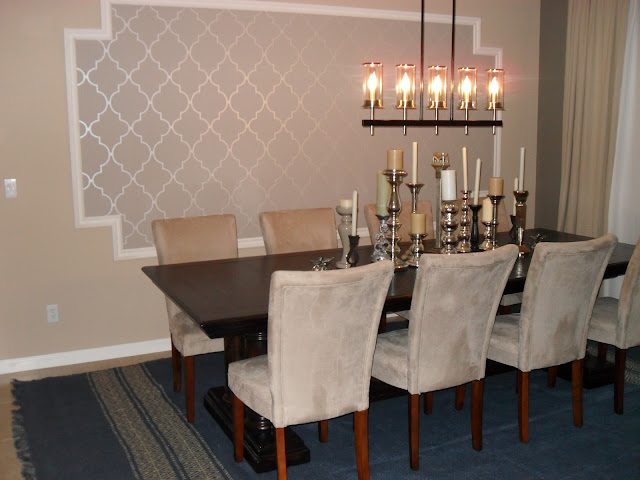 So, in the back of mind, I kept thinking there had to be a better rug solution out there. And then I realized the solution was obvious: PAINT!
Several of the blogs I follow had featured tutorials on painting rugs, and I found several more on Pinterest. I used this blog post as my guide, and supplemented a few steps from other various blogs I had read.
I purchased two ERSLEV rugs from Ikea (the larger size, $59.99 each) and laid them out for a day to let the ends of the rug uncurl. The plan with buying two rugs was to eventually stitch them together into one big rug (my table is 9ft on a short day, after all). 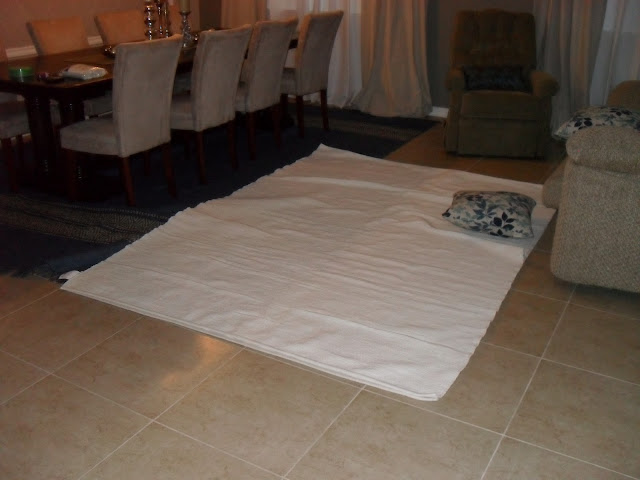 I needed to make a little extra space, so that I could lay the rugs out end-to-end, so I moved the old loveseat to the corner (all by myself, thank you very much!). 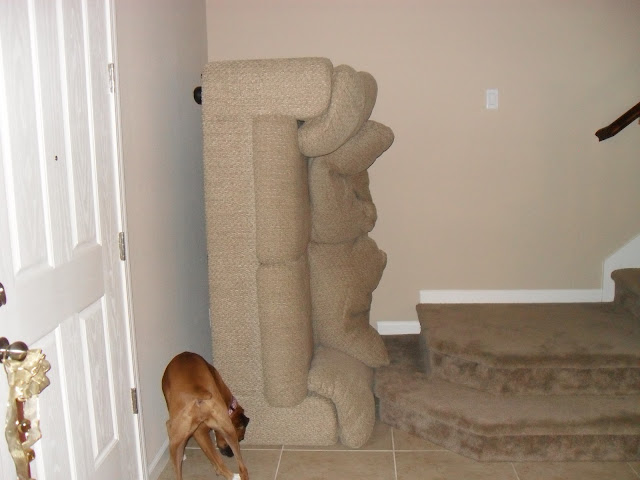 Now that the rugs were laying end-to-end (on drop cloths), I measured and tried to figure out how wide my stripes would be. I knew I wanted a wider, more nautical-looking stripe, so I settled on a 9.5" widestripe.

The rugs turned out to not be exactly the same size. They were off by about an inch. Brian and I attempted to stretch the shorter of the two, which seemed to help.....though, I don't recommend trying to stretch a rug in socks on a tile floor (cue bum hitting tile floor). 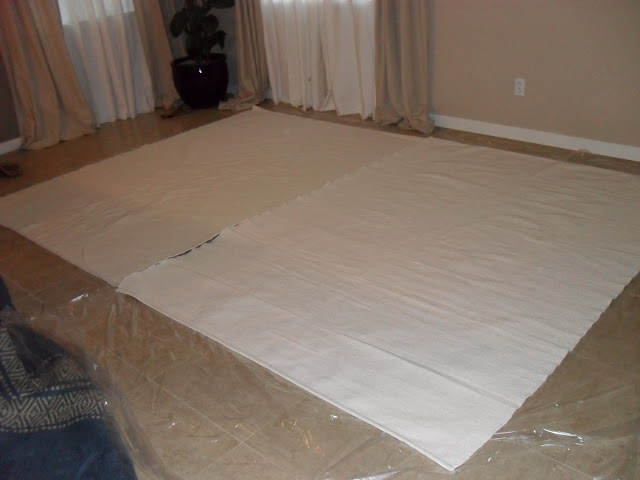 Every tutorial I had read recommended Frog Tape, so I splurged and picked up a roll. 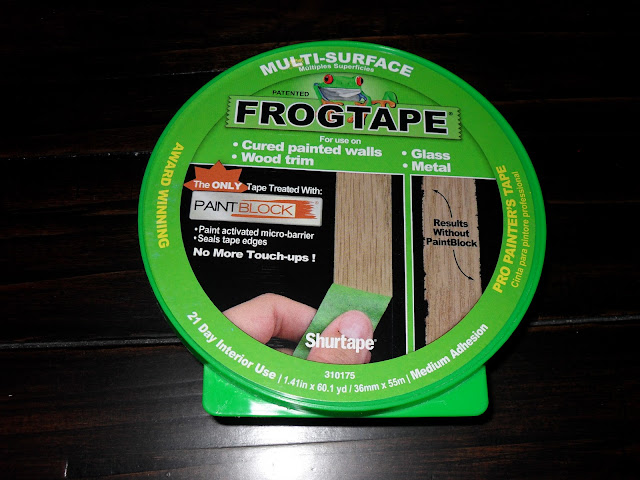 Using my tape measure, I made my way up and down the rug with the Frog Tape. I used a small piece of tape to mark off the stripes that would remain white, which helped tremendously in keeping track of where I was at. 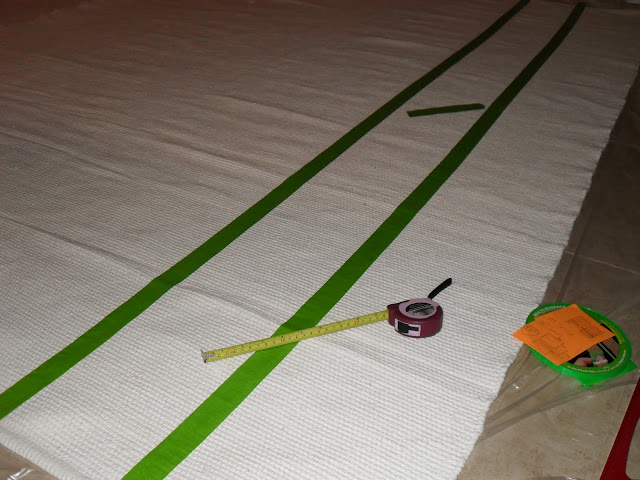 Aybee didn't appreciate being kicked out of the room. 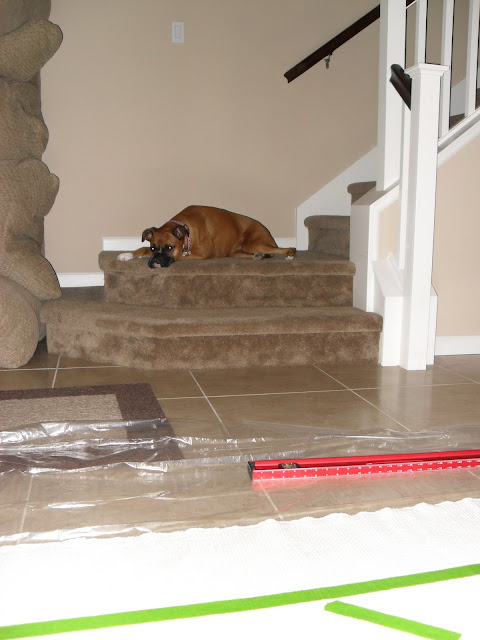 I kept taping until I reached the end of the first rug -- and quickly realized something was off with my measurements. I had intended for my two rugs to meet in the middle of a blue stripe, but that was not what I ended up with. I double-checked all of my tape marks and they were all the correct length. I still don't know what happened exactly, but I decided I was fine with the surprise, and kept on taping. 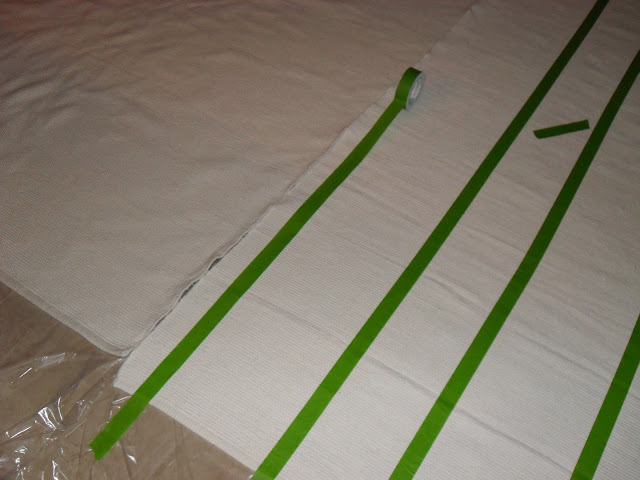 Eventually, both rugs were completely taped. 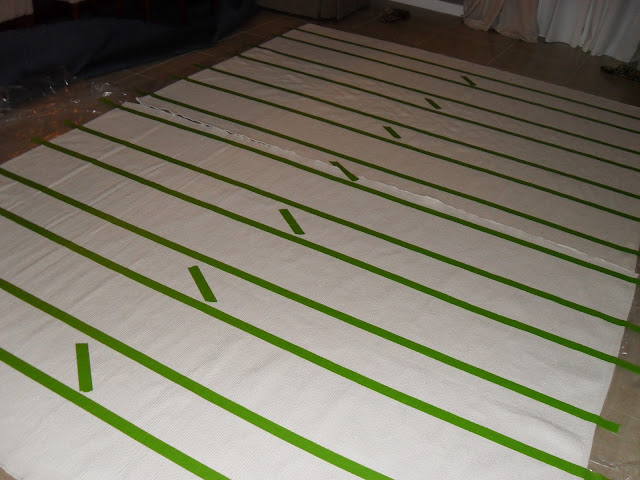 Now it was time to paint! I gathered together all of my supplies: 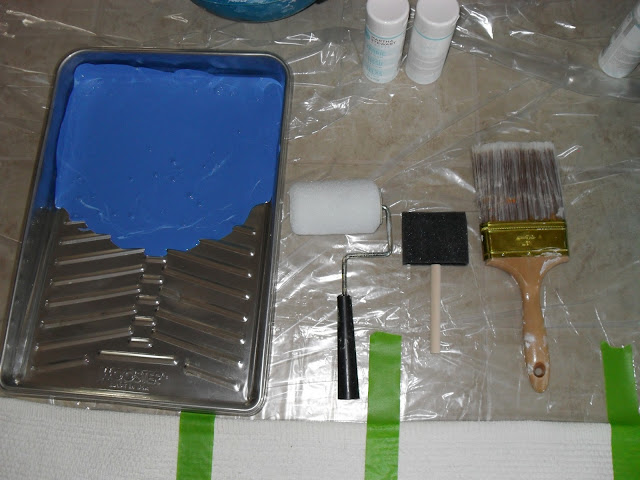 Every tutorial I read mentioned that the project took WAY more paint than they anticipated, so I was prepared and purchased a full gallon. I used just over three quarters of the gallon for both rugs. 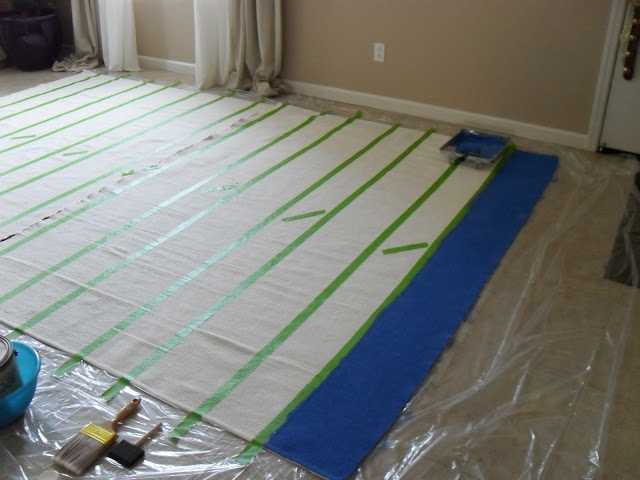 The painting process ended up going much faster than I anticipated. It took about 2-3 hours total to do the painting. 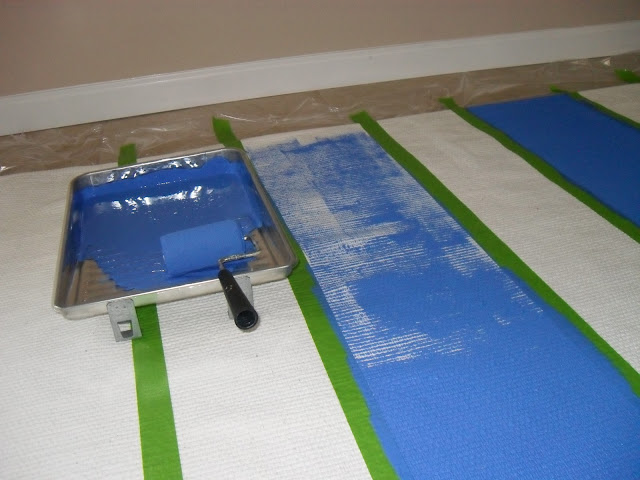 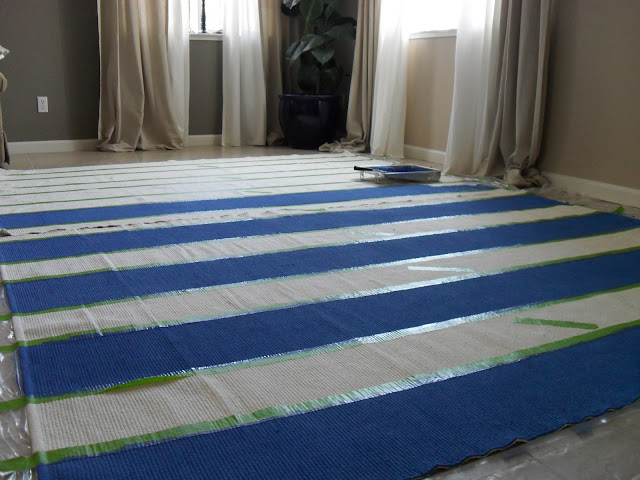 Once I finished the stripes, I went back around with my foam brush to touch up the edges of the rug. 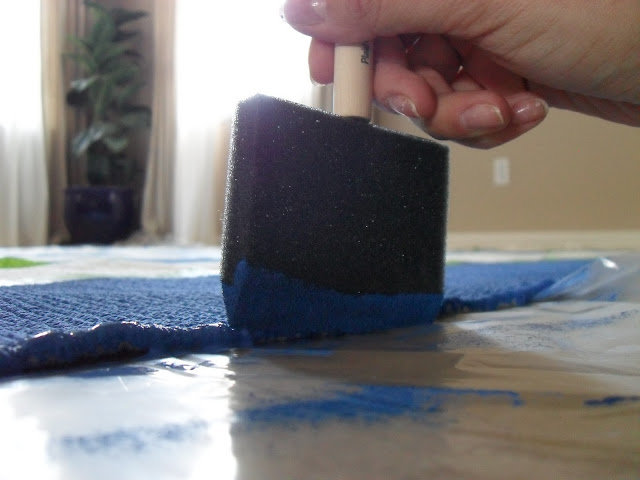 I let the rug sit for about two hours. 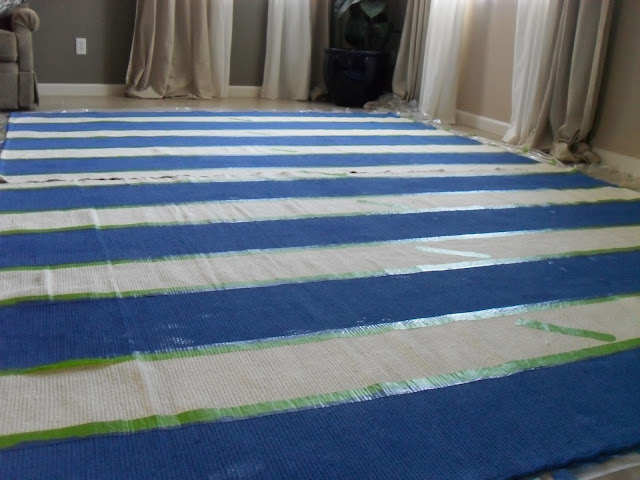 The color deepened as it dried. 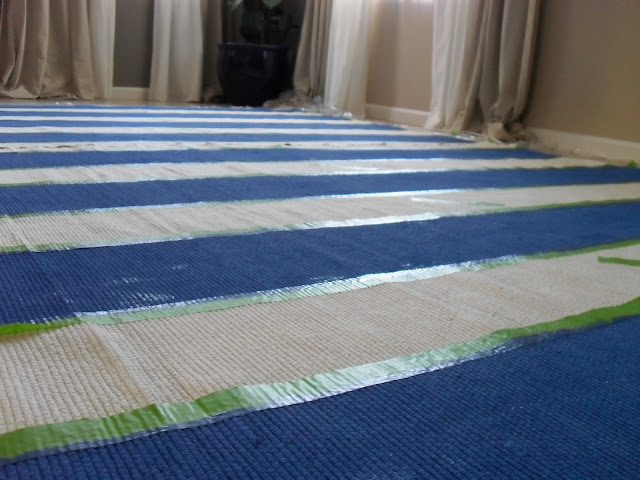 And then it was time to remove the tape....I'm not going to lie, I was really nervous. I definitely had my doubts about the Frog Tape holding up... 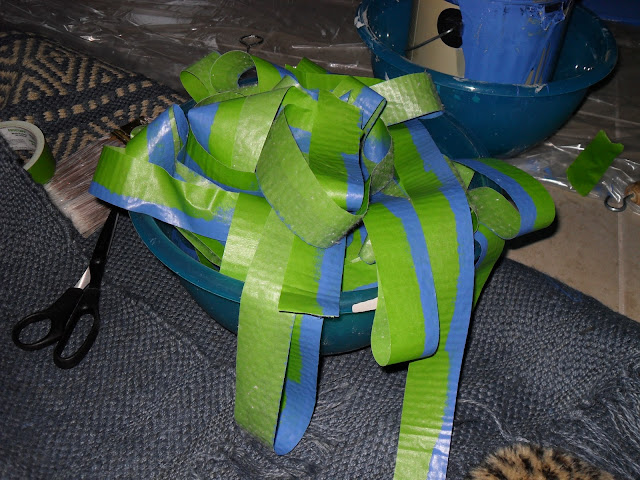 I was very PLEASANTLY surprised to find wonderfully straight and generally crisp lines when I removed the tape. Frog Tape, I heart you! 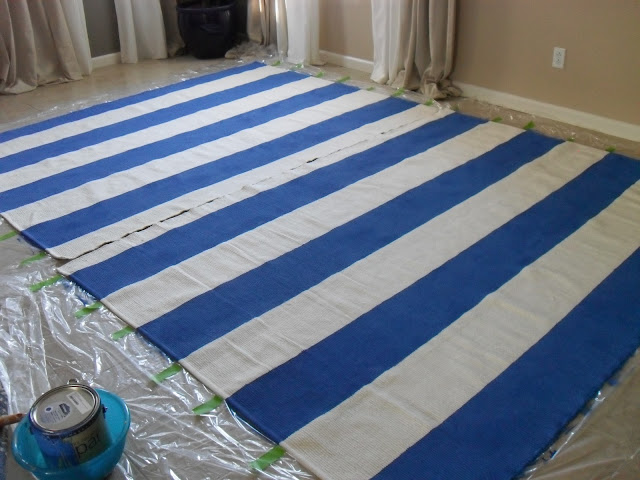 Here's a close-up shot, so y'all can see the texture of the painted sections compared to the unpainted stripes. The rug really absorbed the paint, and the fabric medium kept the texture relatively the same. 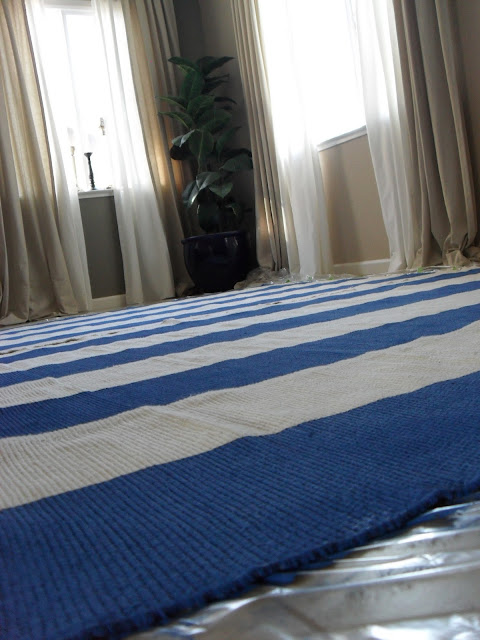 There was only one minor mishap....after I had removed the tape, I caught Aybee inspecting my new creation. Luckily, a little Folex carpet cleaner fixed the damage she did.....but her feet stayed blue for the rest of the day. :) 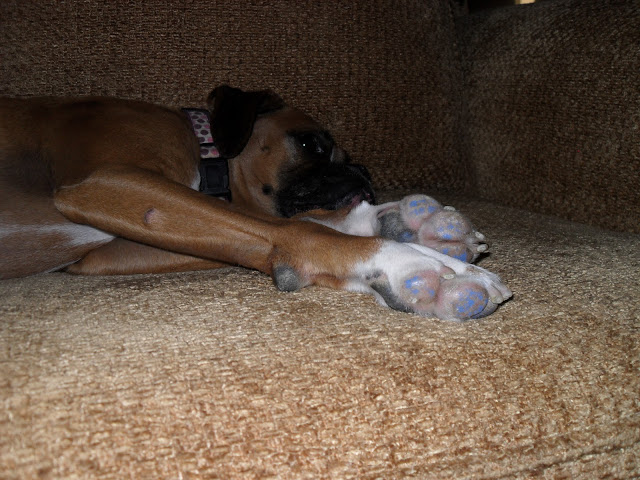 Stay tuned to see how the rug looks stitched together and under my dining table!