Hope you're all ready for some rockin' Moroccan stew! Also known as "how to get your wife to cook dinner in three easy steps."
It all started with Brian getting new tires for the TOA (Truck of Awesomeness -- yep, that's right). He called me from Big O Tires, and non-challantly asked if I had any plans for dinner. {Step 1 -- Planting the seeds of inspiration}
I replied, "Umm, no, not really. No plans." At that point the creative cooking wheels started turning (I like to think of them as cheese wheels....aged cheddar).
"Ok," he said, "Want me to make dinner?" {Step 2 -- Lead the wife to believe that this is a matter of life and death}
"Actually...I have an idea." {Step 3 -- Sit back, relax, and prepare for an awesome-sauce dinner that will melt your face off with its fabulosity}
And verily a celebration rang throughout the land, for Alison delivered a most excellent and fully original creation.... 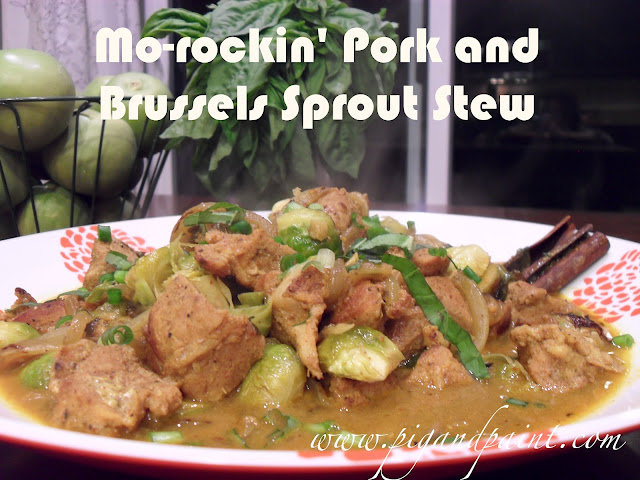 Firstly, I want to address the brussels sprout haters in the world. Um...you're wrong. Brussels are awesome -- if prepared properly. The preparation of the sprouts is key. I used to be a brussels-hater, but now I heart them. Brussels like hanging out with bacon, dijon, heavy cream and more bacon. They like roasting under a warm oven, and long walks on the beach. When prepared properly, they have a delightful nutty, earthy flavor. And yes, I buy them in bulk at Costco.

If you really TRULY can't stand brussels, instead of halving them, try pulling off all of the leaves and serving just the leaves. It will eliminate any lingering bitterness from the stem. Or, you can always wuss out and swap the brussels in this recipe for something like butternut squash.

If you are a brussels-hater but you want to take baby steps towards liking brussels sprouts, here is the recipe you have to try: Alton Brown's Brussels Sprouts with Bacon and Blue Cheese. You will NEVER look at brussels the same way again. I made these brussels alongside filet mignon for a Valentine's Day dinner of year's past, and Brian pretty much eliminated the potential for leftovers by going back for seconds AND thirds of the brussels sprouts.

At this point, some of you (who take pride in your hatred of brussels sprouts) are probably wondering why I have such a low tolerance for picky eaters. I'll let you in on a little secret....it's because you CAN learn to like foods you hate. It's true. Ever heard of the phrase "acquired taste?" It's because some flavors require your taste buds to grow and develop, and those flavors differ for each of us. I've experienced this first hand. Back around 2003-ish, I made a commitment to myself to learn to like the things I couldn't stand (gamey meats like lamb and goat, mushrooms, raw tomatoes, goat cheese, brussels sprouts, asparagus and squash), and to try the foods I was afraid to eat (raw beef preparations, like tartare and carpaccio, and Indian food). I put a "student driver" sign on my taste buds, and got to work! It took some time, but I'm happy to say I've not only crossed everything off of my list (with the exception of raw tomatoes), but these things have become some of my FAVORITE foods. I'm still working on raw tomatoes....I have progressed to the point of tolerating them about 80% of the time, but it just goes to show that it is a process, and it begins with YOU putting on your big girl / boy pants and committing to train your palette. Step one is to stop avoiding the foods you hate.

{stepping off of my soap box}

Meanwhile, back at the ranch....let's talk about stew!! I structured this recipe to walk you through exactly what you should do, and when you should do it. Consequently, the ingredients list kind of all over the place, but hang in there! It's worth doing this right, otherwise you'll end up with over-cooked sprouts (never a good thing). You can serve this over rice or vermicelli, or even alongside naan.


Ingredients -- da meat
Pat the meat dry with paper towels, and make sure the pieces are roughly equal in size (cut as necessary). Toss the meat with the ginger, ras el hanout, salt and pepper, and set aside while you prepare the other ingredients. 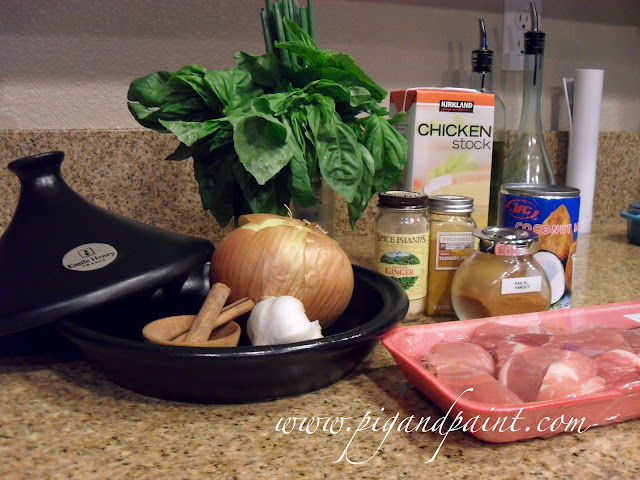 Ingredients -- da brussels
Pre-heat oven to 400 F. Trim the rear end off of each sprout and remove the outer leaves. Slice in half. 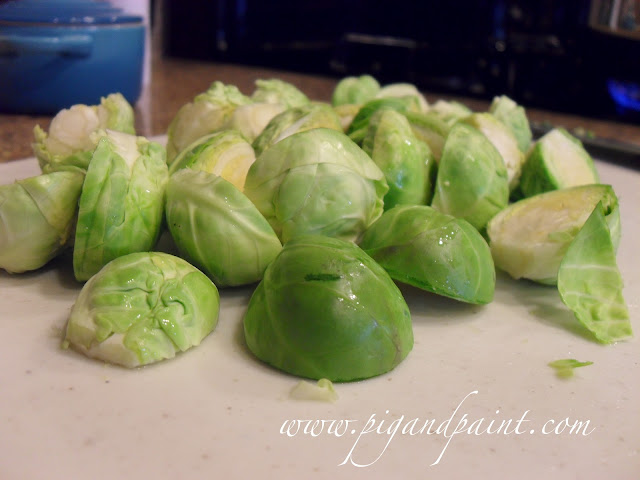 Toss the sprouts with the EVOO, salt and pepper and place in a baking dish. Set aside. 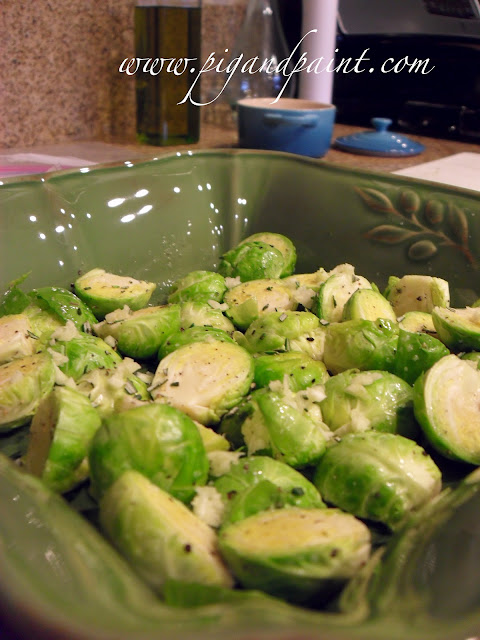 Ingredients -- da other stuff
This recipe calls for the use of a tagine, which is  a traditional Moroccan earthenware cooking vessel, designed to retain and circulate condensation. My sweet mother-in-law gave me mine as a gift, and it has definitely been put to good use! If you don't have a tagine, you can use a smaller dutch oven or heavy bottom pan with a lid.
Additionally, traditional Moroccan cooking typically utilizes ghee as the foundational cooking fat, as opposed to olive or vegetable oil. Ghee is simply clarified butter, and you can make it by simmering butter in a pot until the water evaporates, and you are left with a clear liquid. Depending on the constitution of your butter, you may need to strain out some of the milk fats as it simmers. Be careful it doesn't brown though!
Heat 2 tbsp ghee in your tagine over high heat. Add the onions and sauté until soft and golden, about 5-7 minutes. Add garlic and sauté an additional minute.  Transfer onion mixture to bowl. 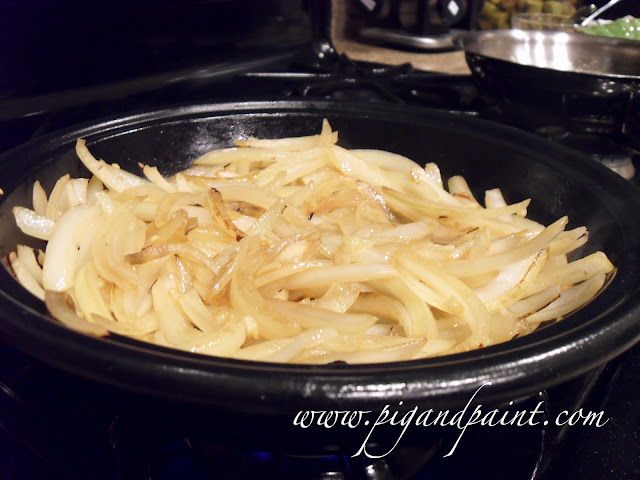 Add 2 more tbsp of ghee to the tagine, and add the pork. Sauté for about 5 minutes, until browned on all sides. 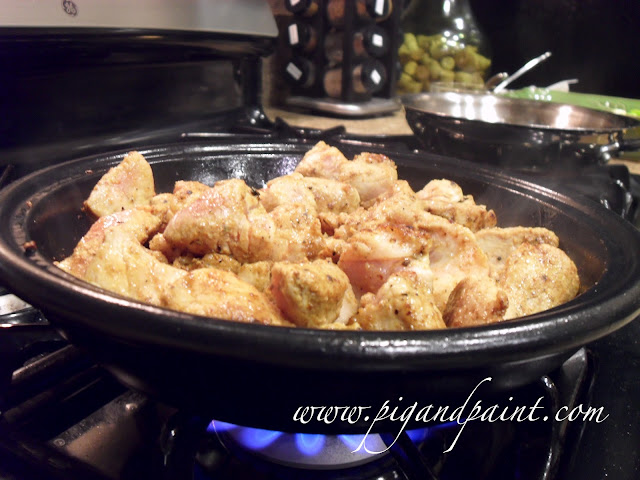 While the pork is browning, add ginger, ras el hanout and turmeric to the onion mixture. 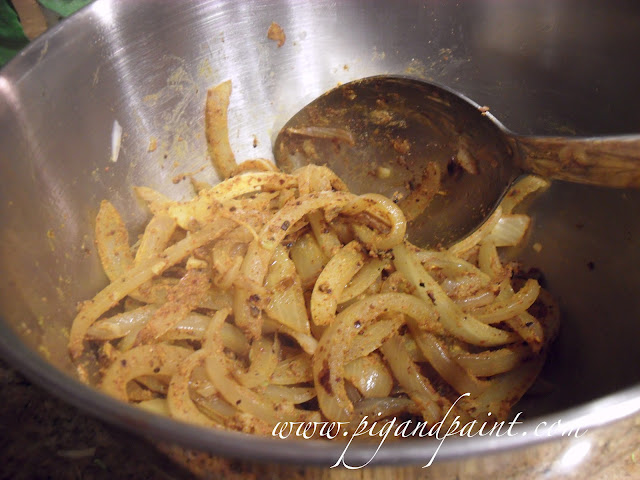 Add onion mixture to tagine. Just pile it all on top of the pork. Add chicken stock, coconut milk, basil, and cinnamon sticks. Reduce heat to low, and cover. Simmer for 35-40 minutes.
At this point, put the brussels sprouts into oven, and roast for 35-40 minutes, tossing once or twice to ensure even caramelization. 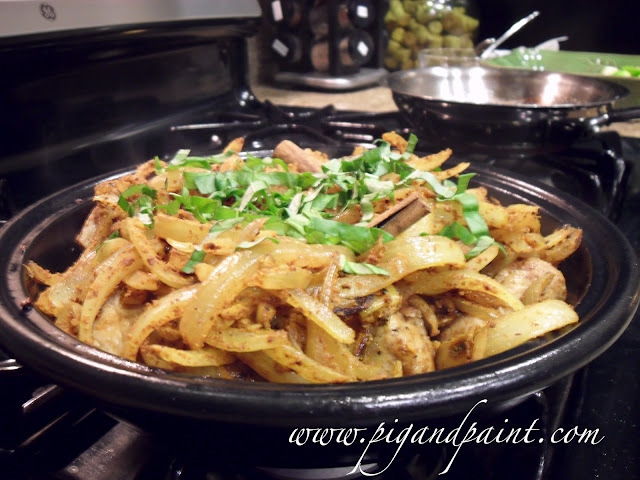 Once the pork and brussels have completed their designated cooking time, combine the brussel sprouts and pork/onion mixture in a bowl. Garnish with fresh basil, green onions, and a drizzle of coconut milk. 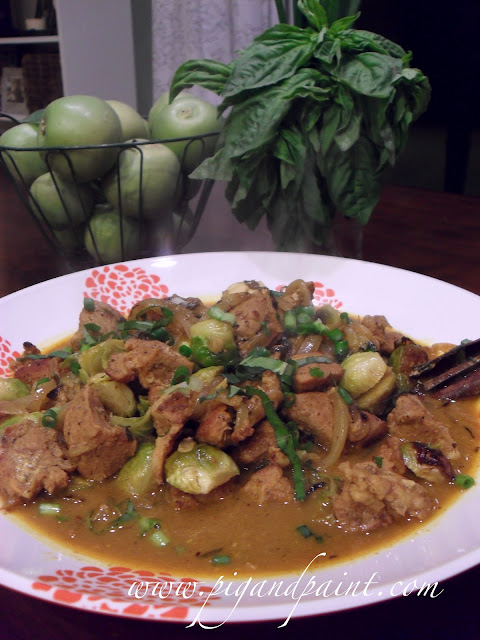 The hubster gave this one two enthusiastic thumbs up, in between shoveling it into his face. 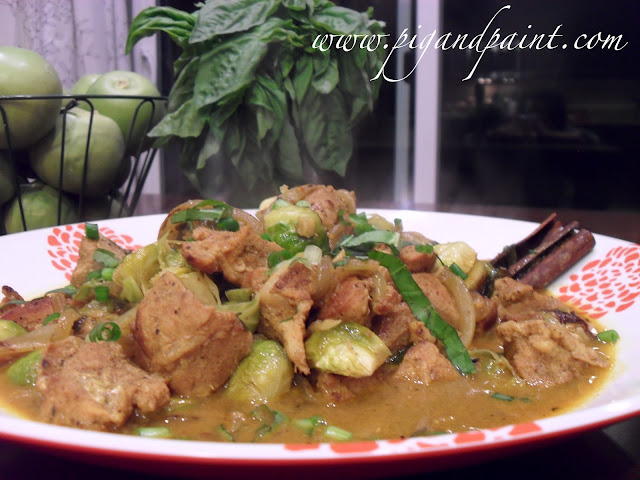