I was in the mood for some Asian flavors, and ended up with a surprisingly amazing meal. I didn't write down exactly what I did, because I honestly didn't fathom that it would taste as good as it did. It sure looks good, doesn't it? Don't you wish you had the recipe? I know I do!! I probably will never be able to recreate this....but...you win some, and you lose some. In the end, you just keep on eating -- and that's all that matters. 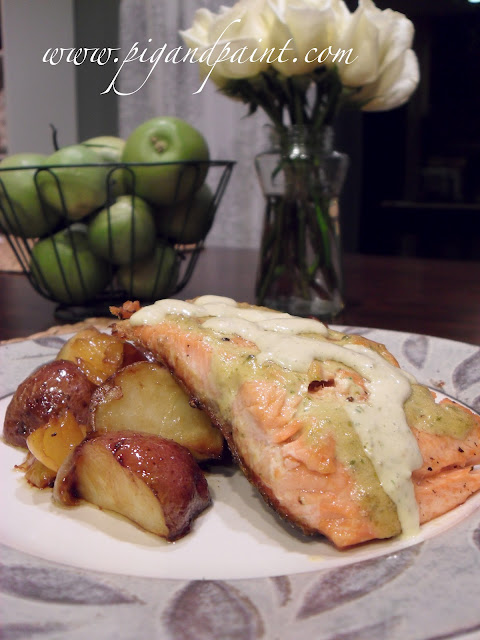 I like to buy my salmon with the skin-on, especially if I plan to sear it. It's like the heat shield on a space shuttle, re-entering the atmosphere. Ok, maybe not EXACTLY like this, but you get the picture. The skin gets crisp, and keeps the delicate fish protected and juicy.

I start by slightly salting the skin-side, and letting it sit for 20-30 minutes. This draws the moisture out, so that when I sear the fish, the skin will get extra crispy. 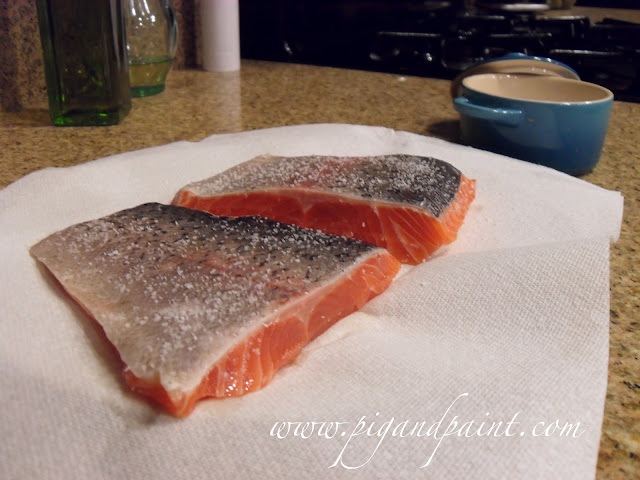 While the fish sits (I like to think of it sitting in a burgundy wingback chair, with a pipe, reading the Wall Street Journal), I prepared an experimental aioli. I was aiming for that delicious spicy sauce that typically accompanies spicy sushi rolls. That sauce is primarily Sriracha and mayo (among other things).....I did not have Sriracha on hand, so I improvised. I added varying amounts of mayo, dark soy sauce, ground ginger, jalepenos and sesame oil to my food processor and let it whirl until the mixture was smooth and was spiced to my liking. 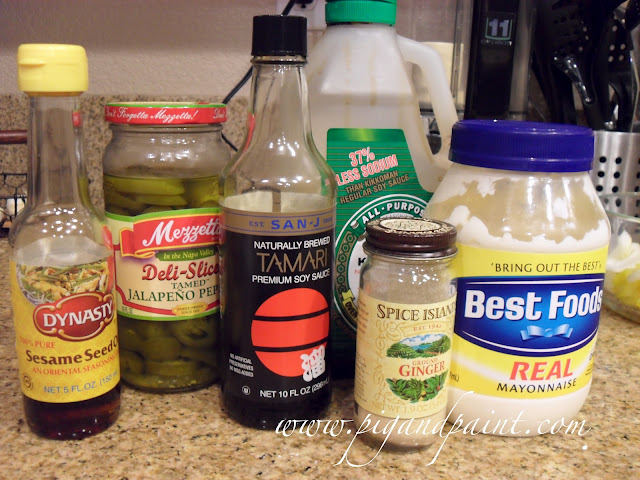 I tossed chopped potatoes and yellow bell peppers with some salt, pepper and olive oil and roasted the veggies in the oven. 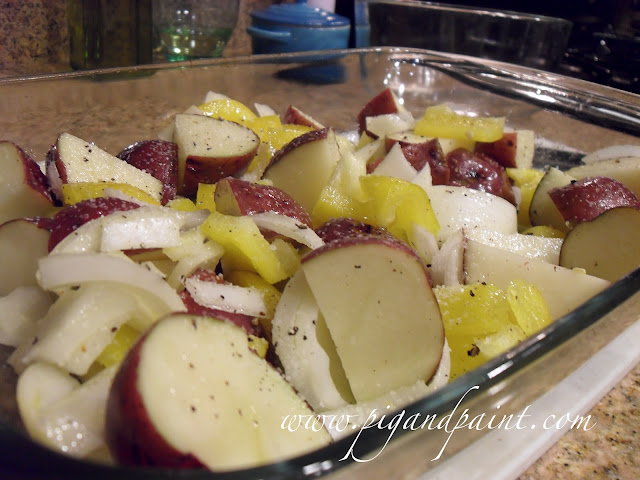 While they roasted, I prepared a soy-caramel of melted butter, brown sugar, dark soy sauce and a teeny tiny splash of sesame oil. I let the glaze come up to a bubble, stirring all the while to ensure the sugar and butter melted. 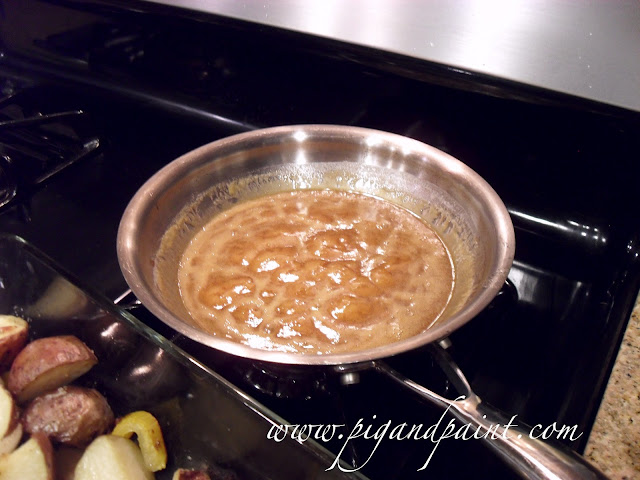 I pulled my roasting veggies out of the oven, poured my soy-caramel over them, covered them with foil and popped them back in the oven. About 10-15 before I was ready to serve dinner, I removed the foil so that the veggies could brown a bit more. 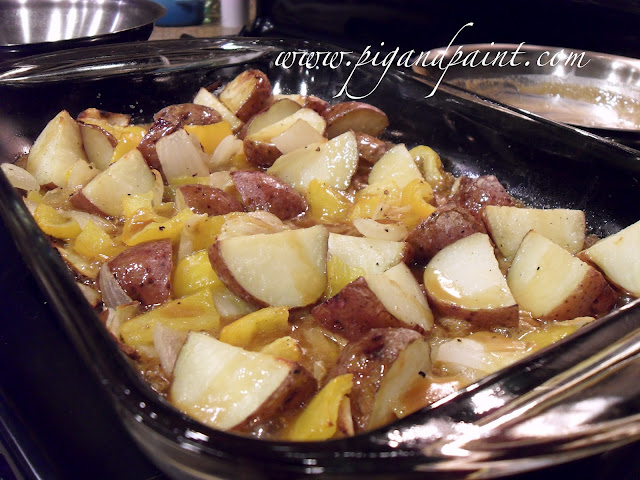 I seasoned my fish with salt, pepper and olive oil. 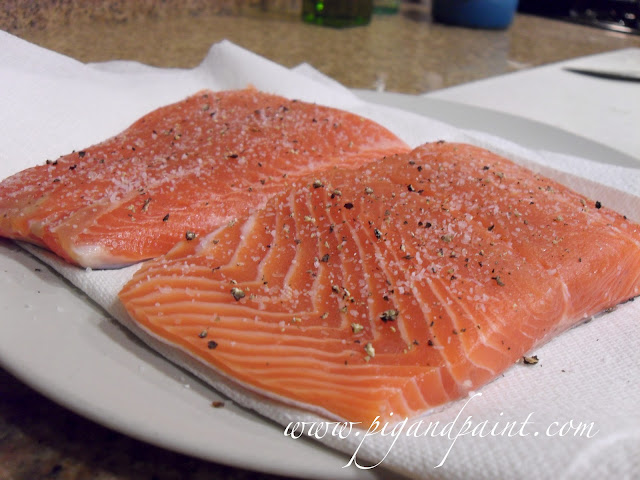 I seared them in a bit of olive oil, skin-side up first, for a few minutes. Once the fish "released" itself from the pan (that's how you know it's done searing....it should easily release from the pan when you attempt to flip it), I flipped the fish and covered the flesh side with half of the aioli. I popped the fish in the oven to finish cooking (with a timer-thermometer securely stuck inside the thickest part of the fish). 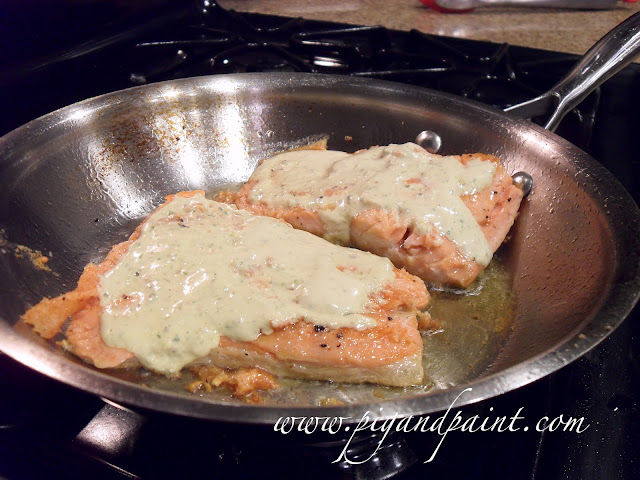 I served the fish atop the roasted veggies, and drizzled the remaining soy aioli on the fish to garnish. Here's to food experiments going well!