I'll be completely honest and say that this is one of those recipes where you will just have to blindly trust that it will taste good when it's finished. Because it will leave you wondering at times. But trust me -- this is a winner and it's an easy, make-ahead dinner party meal (or just an easy weeknight meal).

Mole (pronounce moe-lay....not mole, ya weirdos. This ain't no Duck Dynasty affair over here) is a traditional Mexican sauce made with an assortment of toasted herbs, spices and chiles....and chocolate! It's very rich and complex in flavor, but not complex to make. In fact , this mole sauce recipe makes enough for two dinners, so you can freeze half of the sauce and bust it out later. Which I plan to do. Just sayin'. 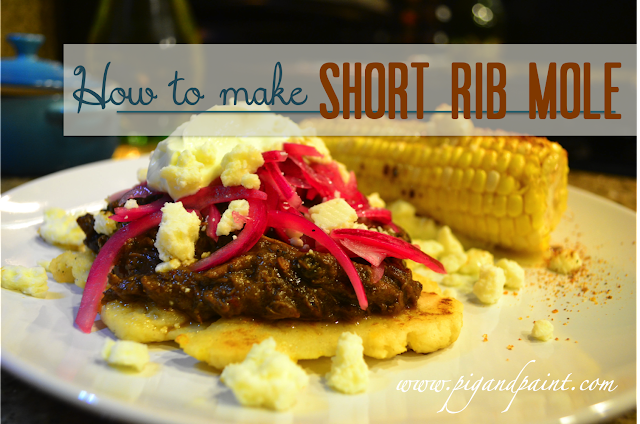 This recipe is based on Tyler Florence's Turkey Mole Poblano. Minus the turkey. Because, heck, beef is awesome and beef short ribs are even more awesome. But you could use almost whatever land-dwelling protein you like.

I start by making the mole sauce sans meat first. This is a fantastic staple to add to your kitchen repertoire, and as I mentioned above it makes a double order of sauce so you get two dinners out of it.

Tear the chiles into large pieces and toast them in a dry skillet with high sides (or a dutch oven) over medium heat until they change color a bit, about 2 minutes. I didn't have any dried Anaheim chiles and, frankly, have never been able to find them at my local grocery store, so I just doubled up on the anchos. 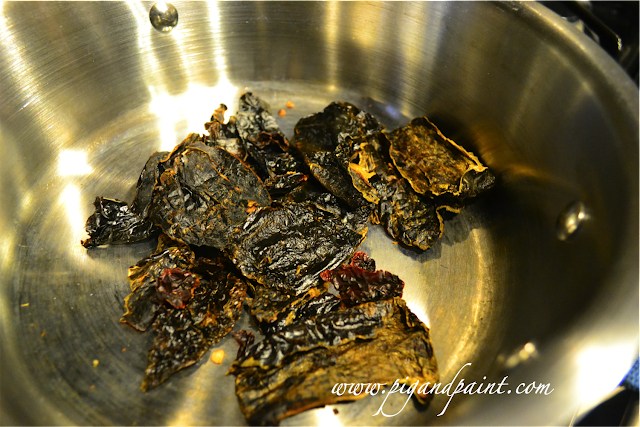 Put them into a bowl with the raisins and cover them with hot water. Soak until the chiles are softened (about 30 minutes).

In the same skillet over medium heat, add the almonds, sesame seeds, peppercorns, cinnamon stick, oregano, and thyme (I forgot to photograph the peppercorns, but don't worry, they made it into the pot). Toast the spices for 2 minutes. Transfer the spices to a spice grinder and grind, baby, grind! Set aside. 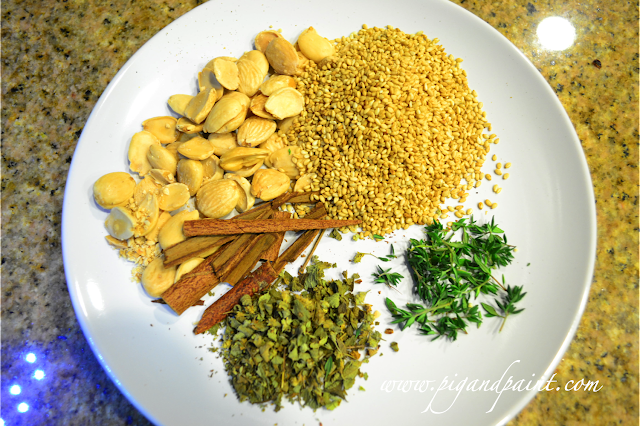 In the same skillet, over medium-high heat, add the olive oil, onions, garlic, and serrano. Cook until the onions are lightly browned. 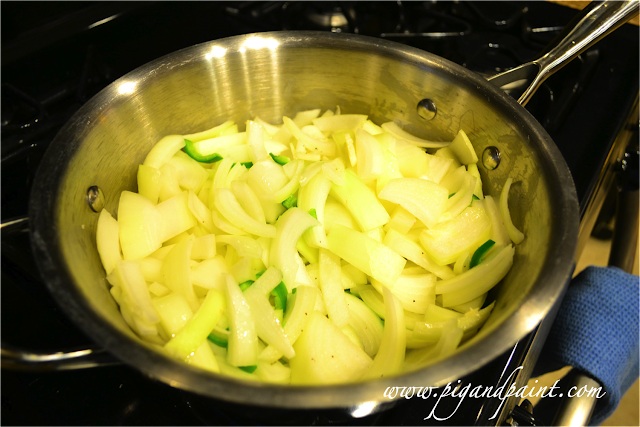 ...And then add the tomatoes. 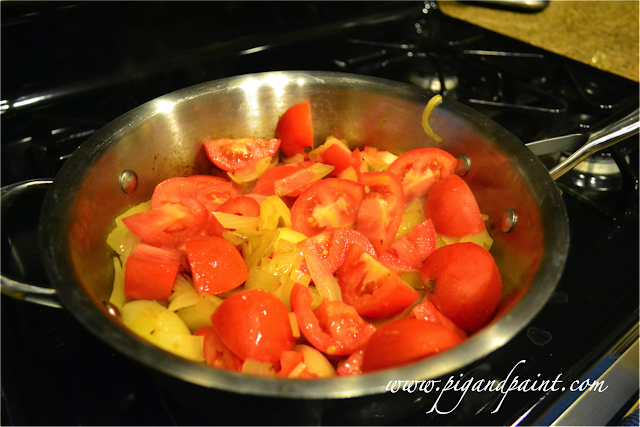 Cook until the vegetables are soft, about 10 to 15 minutes. 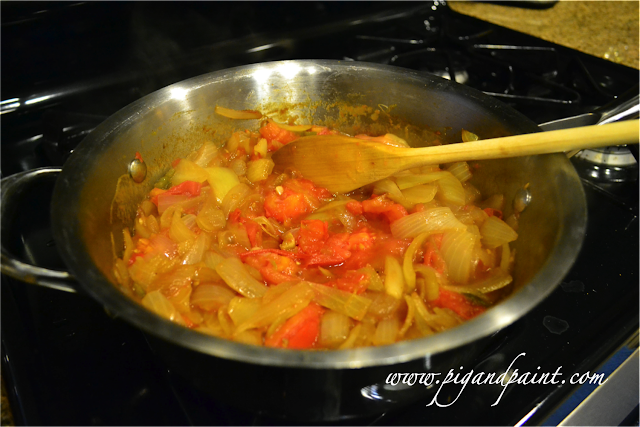 Add the chocolate, ground spice mixture and the soaked chiles and raisins to the pot along with some of the chile soaking liquid. 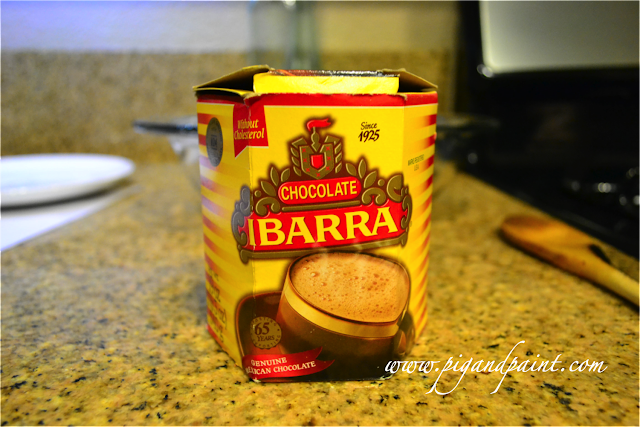 Puree using a hand blender, adding more soaking liquid or chicken stock, as needed, to make a smooth sauce. You can also use a regular blender, but I find a hand blender to be easier. :)

Once you reach the desired smoothness, your sauce is ready! If you taste-test at this point, don't be alarmed if you're not 100% pleased with the flavor. This sauce really comes into its own after it's slow cooked with a protein. 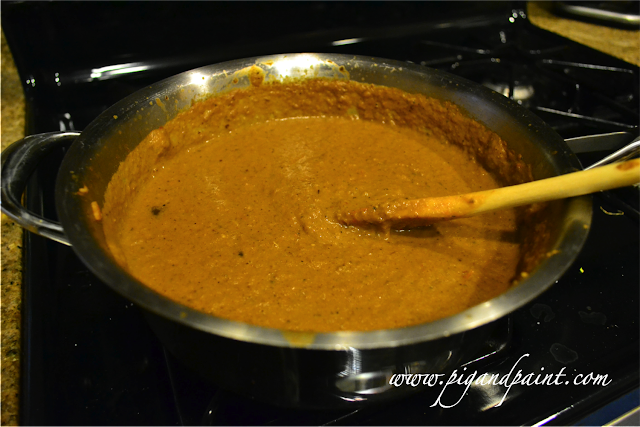 I generously seasoned the ribs with salt and pepper. 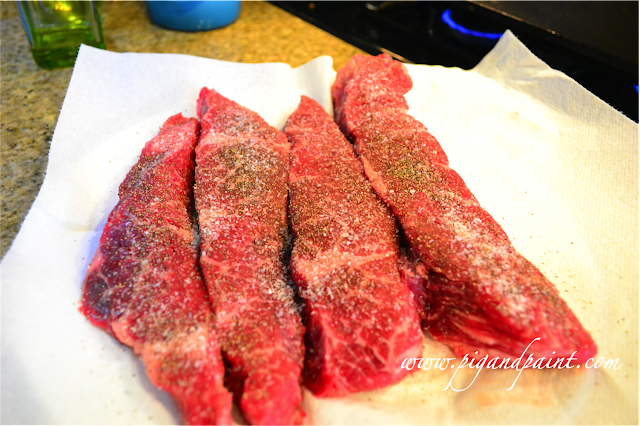 I browned them over medium-high heat with a little bit of EVOO -- this step is optional. You could just toss the ribs directly into the crockpot without browning them. 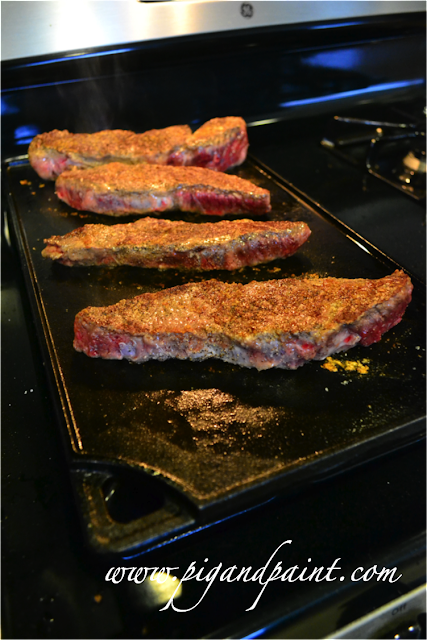 The ribs walked single-file into the crockpot. 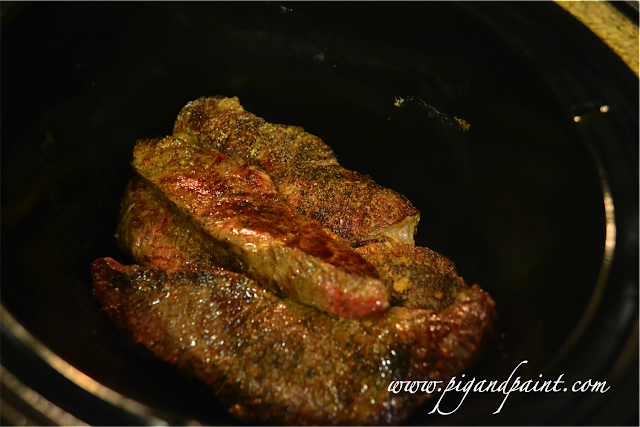 And then I piled on half of my mole sauce on the ribs. I set the crockpot on low for 6 hours. 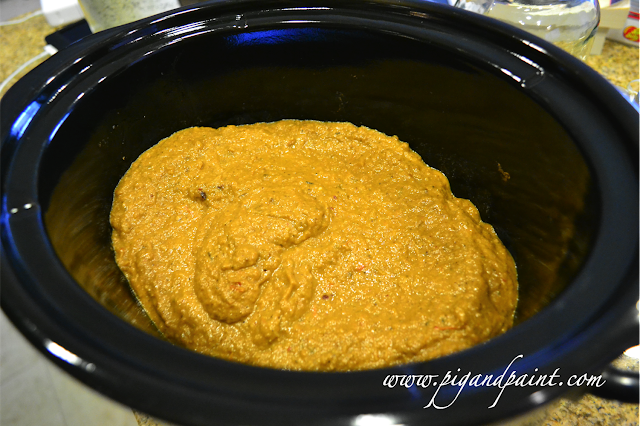 I served the mole over arepas (a South American staple, much like a corn pancake), but you could serve these over rice, over plantains (think tostones), or in tortillas. You can get my arepa recipe by clicking here. 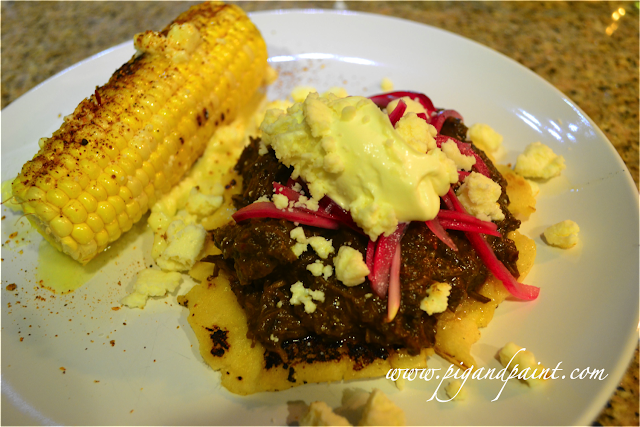 We garnished with marinated red onions, cotija cheese and creme fraiche. It was to die for!! 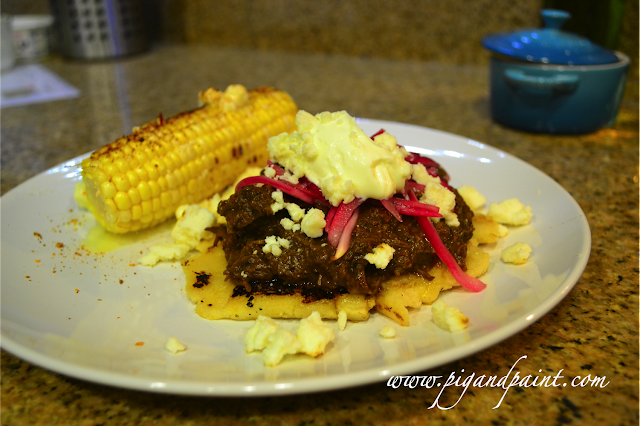 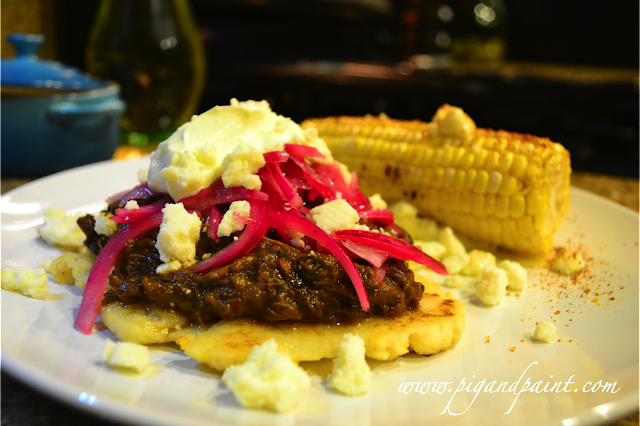